The Terror of All Hallow's Eve 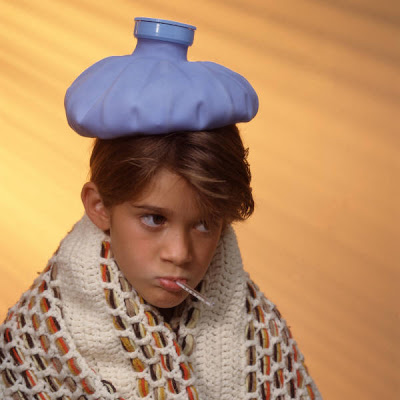 It was All Hallow’s Eve, and poor Dexter was sick.
“Son, you’ll have to stay home,” Mother said.
Though he begged and he pleaded, her mind wouldn’t change.
Just the thought of it filled him with dread. 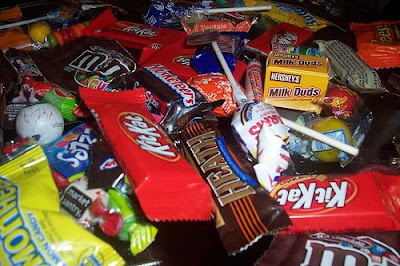 Halloween with no candy! No tricks and no treats!
It was ghastly. It couldn’t be true.
He looked so upset that his mom said, “Don’t fret.
I’ve got plans…really BIG plans…for you.” 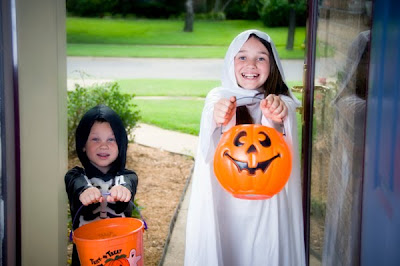 “My job will be yours this year. Answer the door,
hand out candy, and have lots of fun.
You can still wear your costume and frighten your friends.
I’ll go upstairs and get some work done.” 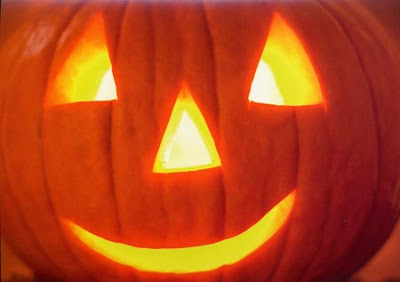 Dexter liked this idea. A Halloween grin
split his face like a bright jack-o-lantern.
He would scare all those guys and girls right to the moon.
(Maybe he’d even shock ‘em to Saturn!) 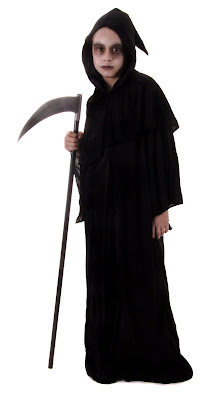 He donned his Grim Reaper robe (yikes!) and prepared
to be freaky as freaky could be.
“Thumbs up,” said his mom. “You are creeping me out!
Take these treats. Don’t give out more than 3.” 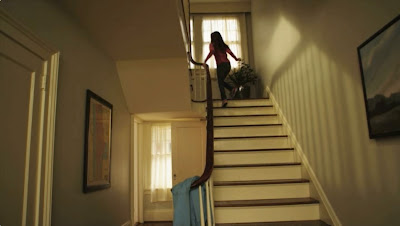 She walked up the staircase, and Dexter sat down
to await the first knock on his door.
When it came, he was ready. He jumped up at once,
moaning loudly as he crossed the floor. 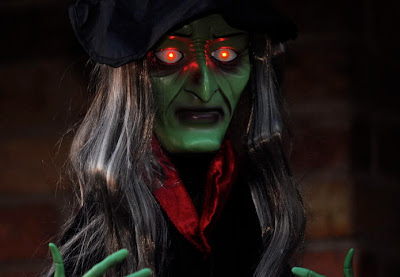 Dex creaked the door open and howled eerily
at a horrid green witch with a mole.
She grabbed at the candy, took more than her share,
cackled twice, then let go of mom’s bowl. 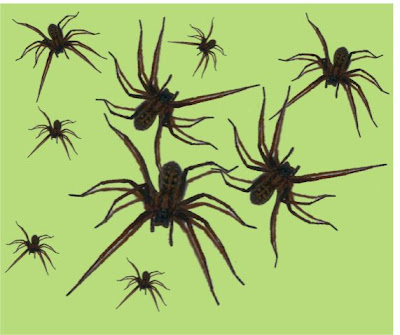 He touched something slimy and cold. Looking down,
on his hand was a gooey, green gel.
It turned into spiders that ran up his arm
when he let out a squeak and a yell. 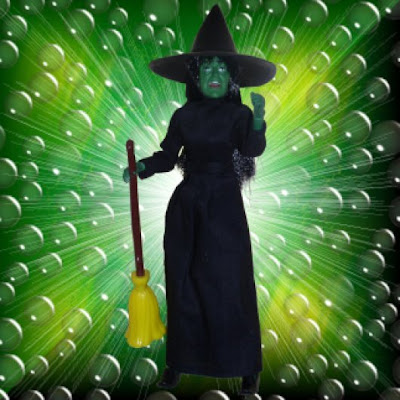 Her eyes glittered black, then the witch Dex was meant
to be scaring took hold of her broom.
It was twitching! He slammed the door shut in her face
and ran up 13 stairs to his room. 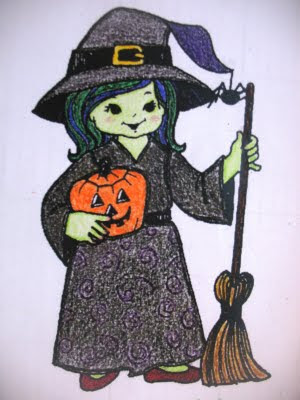 He wanted his mommy, but Dexter was 8.
Things were different than when he was small.
He’d overreacted. That witch was some kid
with a really great costume; that’s all. 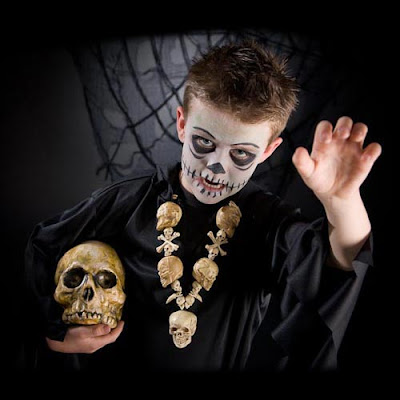 The bell rang again, and he walked down the stairs
feeling silly and far more prepared.
This time would be different. Dexter, the Grim Reaper,
would be the Scar-ER, not the Scared. 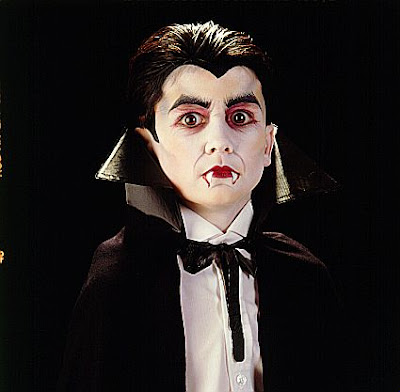 He swung the door open. Count Dracula! Lame.
He could shock that kid out of his shoes.
“I want you,” Dexter hissed, but the Count only smiled.
“Zat is perfect, for I vant you, too.” 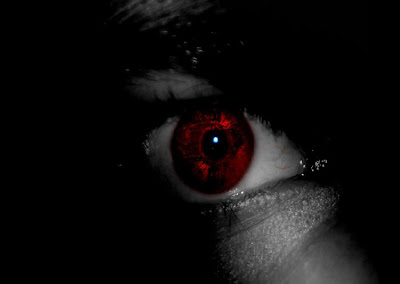 The air seemed to change; his dark eyes glowed deep red
as he raised his long cape and leaned in.
Dexter gulped. Were those fangs there before? Were they real?
Was that blood dripping down the fiend’s chin? 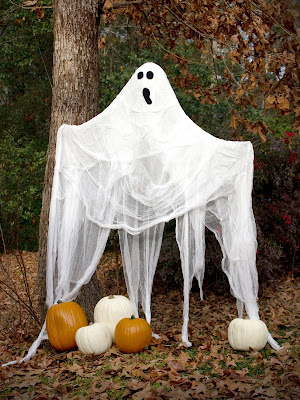 Dexter ran from the house past a ghost in the tree
to the corpse hanging on an old swing.
He could still smell the sweet scent of vampire juice
when the skeleton started to sing. 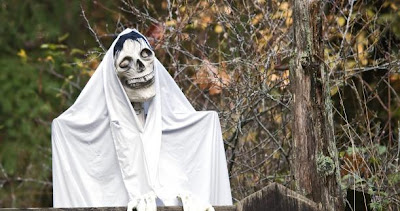 The words that it sang were horrific; they crawled
up your spine...chilled you down to the bone.
Each note held the music of terror and trouble
that claimed you and made you its own. 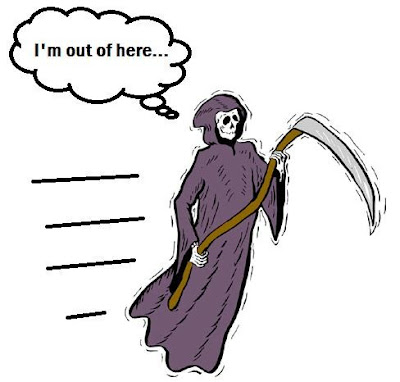 Dexter raced for his back door in fear and leapt in.
No more Halloween creatures. No more!
The night had gone wrong…awfully, frightfully wrong.
He felt sicker than ever before. 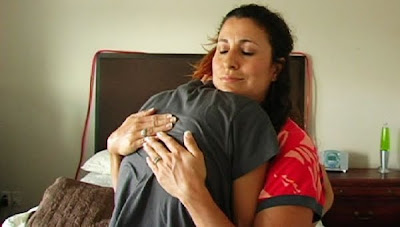 He yearned for his mother to put him to bed…
safe, warm bed…with a sweet lullaby.
When he flew up the stairs and ran straight to her arms,
Dex bid ghosts, ghouls, and goblins good-bye. 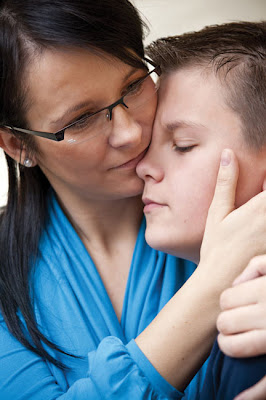 “You’re burning up, son, and you’re trembling, too.”
Mother hugged him and brushed back his hair.
It’s Halloween night. Everything’s “just pretend.”
Then she kissed him and looked toward the stair. 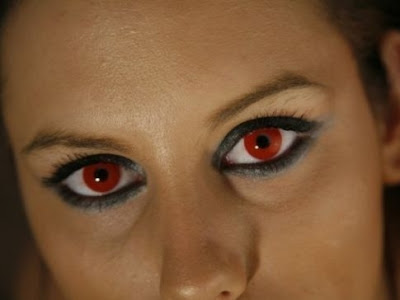 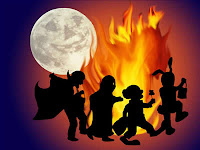 Happy Halloween to the most spooktacular grandchildren ever!
with toads loads of love and creepy good wishes
from your Ghostma and Ghoulpa Anderson

Posted by Susan Anderson at 9:11 AM

Oh poor little munchkin! This was quite a delight, and music oh so scaryyyyyyyyyyyyyyyyyyyyyyy! Thanks! hoping Halloween is happy and healthy for all!

Handing out candy was always my favorite part of Halloween ... but I never encountered scary visitors like Dexter!

Ha,Ha,Ha good poem! Your grandkiddies are gonna like this one. Thanks for visiting!

I love a good creep-out for the kids. Happy Halloween!

Creepy and scary-perfect for those grandkids of yours.
And I was surfing the Alphabe-Thursday sites when I started reading a poem in a sidebar that sounded sneakingly familiar--yours about word verification! Made me smile.

What a cute Halloween post ! In Belgium we don't celebrate Halloween very much, it moves in a little more each year. Mostly for the kids, but no decoration and no trick and treats (yet).

haha fun tale...oh i hope he feels better...that must be some fever for the dream he is having...smiles.

Oh poor Dexter! This is like no Halloween I ever had! But I did have a frightful creepy nightmare during one of the only fevers I can recall ever having as a kid, so I can relate. Sue, the poem and post is fabulous. It needs to be read out loud to get the full rhythm and rhyming effect. Kudos!

Ha! You had us going there! That's what Halloween is all about....the scary stories!!

Great story accompanied by beautiful photographs and a terrific music.

This was priceless and a fantastic children's story; publish it.
The pictures were so good and I loved the poem.
You delight me and blessing to you for the smiles today.

very cute. Our children aren't going around till Monday. And I would like a helper to hand out the candy! I thought the music was coming out of the other room. Duh! {:-Deb

Awesome Halloween story! The spider part freaked me out a little though. I am terrified of those things! ~:o

You've got that creepin-me-out thing down pat! Those eyes did it for me!~Ames

That was awesome :) I use to feel jealous that so many people visited the homes of my friends on Halloween but we would have maybe one group (none on most years) since we lived up on a steep hill. After reading this, I'm glad we never had anyone coming to our door asking for candy!

OH know and I am alone in this big ole farm house tonight. What is your phone number girlfriend. I may be calling you after reading this scary post. hahaha
What a good writer you are. Kept me scare all the way through and even now as I write this I am listening for noises.
Sweet dreams Right
Love
Maggie

You are SO gifted!

I just know the gang in Temecula will love this one. You outdid yourself Sue. It almost frightened me. As for the two of us. We used to love passing out the candy and commenting on the costumes, but the last few years have been crazy. I swear they are busloading kids into our neighborhood. We don't have but two children in our whole area and yet the kids keep coming non stop. It just got to be too much and too expensive so now we go over to our friends who live in a gated community for adult over 55 and there are NO children there, so it is a very quiet Halloween. They do have a comfortalbe chair for me, so I am sorta looking forward to it. I am getting sick of sitting in this chair and icing all day.

You are a word genius Sue!

Now that's a great Hallowe'en treat for the kids!

You are so creative, Sue...and the music was perfect. Loved it!

Loved this! And got a few chuckles along the way too. Your grandkids are lucky!!!

Thanks for stopping by. Hope you enjoyed the fun.

Have a great weekend & look forward to *seeing* you again next time,

tee hee! That was wonderful SUE!

Fantastic post for Halloween! If I see Dexter though, I won't open the door. I might have a heart attack with my old age!

Awesome!!!! See? This is what I mean. You are the best grandmother in the whole world!

i'm always sick on my birthday, a week after thanksgiving, but never halloween. i'm not sure which would be worse...p.s. those spiders were sooooo creeping me out. yuck!

Thank you for linking this! What tough day he had!

Sue, this was fabulous! This needs to be a childrens book!