Worst Person in the World? Gimme a Break! 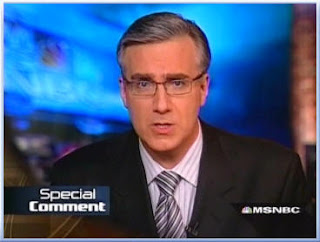 I am probably one of Keith Olbermann's biggest NON-fans, and when he gets to that portion of his self-serving hour where he rants and raves about the worst person in the world, I am never amused. Usually, though, my brief involvement with the show stops right there. I am not amused, so I turn the channel or find something else to occupy my time.
Last Wednesday, however, good old Keith named an apostle of my church as the "worst person in the world." Yep, Elder Dallin H. Oaks was awarded that dubious distinction simply for delivering this talk (about preserving religious freedoms) to a group of young people at BYU-Idaho. If you haven't already, I hope you will take a look at the text of his address, because despite the fact that it's been twisted and parsed beyond belief by the liberal press, not one paragraph of it merits Olbermann's hypercriticism. Or even his disdain. True, the opinions expressed aren't exactly up Olbermann's alley, but the content and tone is as respectful and well-reasoned as would be expected of the former Utah Supreme Court justice that Elder Oaks is. And it's a free country, right?
But apparently not quite as free as it used to be. Which is exactly the point Elder Oaks makes...
Posted by Susan Anderson at 7:44 AM

UGHHHHHH, I can not stand that man. He spits when he talks, he is so nasty, ughhhh! Oh my, I'm pretty sure my bp just went through the roof!!! Yucky, yucky man.

Heidi was actually in attendance at that talk, and she called home the second she left the auditorium to say how wonderful it was. I haven't read it yet, but I will. Thanks for the link.
And come on! Worst in the world?

I suppose he just proved Elder Oaks' point perfectly.
What a sicko. It's a good thing I already have no respect for him, otherwise it would be gone.

Its a good talk, and no reasonable person would object. I guess they can disagree, but it certainly wouldn't merit the venom that old Keith can spew. He's a horrible man, and what makes it worse is that most of it is done simply for the camera and ratings. I mean, c'mon... I can remember when he was doing the Sportscast on ABC or NBC evening news- can't remember which. And now he's the guru of morality? Please...

I was unclear in my comment and wanted to restate my thought.

I want to say that by Keith drawing attention to the talk, people are going to look for and read it for themselves--that's what I do. All Keith has done is helped to spread Elder Oaks words and Heavenly Father's message.

So Keith ends up helping out. Good job Keith.

And I agree. Since he left ESPN, he isn't very nice. At all.

Sue. Hi, my name is Jan and I was given this post from a friend thru email. I didn't ask permission, but I used it word for word because you are a rocking star :) Appreciate for tenacity and insight. I am right there with you.

If you have a problem, I will certainly take it off my site okay. Have a great day.

Wow, that's interesting. I'll have to read the talk. Thanks for informing us ;)

Wow, how sad is that.
While being out of the states the past 3 months, coming home to all the "junk" has been very difficult.
But, the only advantage to this man's "opinion" is maybe it will lead a few people to read Elder Oakes talk for themselves and maybe, just maybe the truth will come through.
I admit in the two weeks I have been home I have watch no news and very little tv...sounds like I might be on the right track...

blah. any time a person speaks in those terms of worst and best i get bothered. so bugged that anyone is making a big deal out of it in the first place. no surprised, just bugged.

p.s. so where does that leave hitler?