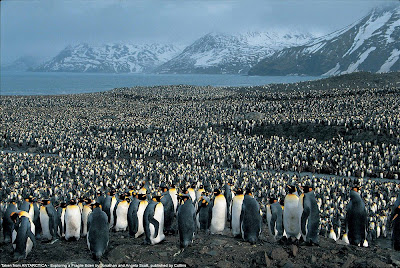 Ever wondered what even 1% of Oprah's fan base would look like, placed shoulder to shoulder? As these penguins do, her peeps would stretch as far as the eye could see. There was a time when the magnitude of Winfrey's following made sense to me. Lately, though, I can't understand it.
Back in the early days, when I was first exposed to Oprah, I actually lived in Chicago. My husband and I were newlyweds, and I came across her show one day while flipping through the channels in our sun-drenched, window-seated, plant-filled apartment. (Oops...a bit of "young marrieds" nostalgia slipped in there.) Sorry.
Anyway, my impression of her was immediately positive. I not only liked her down-home, "real person" feel...I liked that she had a lot of down-home, "real person" things to say, which appealed to me. Let's face it...She beat Phil Donahue, who had become increasingly elitist and pedantic, though I had remained a faithful watcher because he was the only game in town that took calls and involved the audience. Until Oprah, that is.
I became a fan. For years. Yes indeedy; I was one of Winfrey's penguins...and happily so. Oh sure, some of her subject matter was a bit off base at times, but even that was taken care of when she decided several years ago to do only upbeat, "enlightening" shows, shows that encouraged her viewers to think and learn and grow. And she would grow along with them...or at least, that was the idea.
And she did grow...evenly, for awhile. But after a few more years the only thing that seemed to be growing was her increasingly big head. And her ego. And her view of herself as a guru.
I've mentioned my disenchantment with Oprah here before, but a recent article in Newsweek has kicked up all those old feelings again and inspired this post. Maybe it isn't even fair of me to comment at this point, as I haven't watched her show since she went hog wild over The Secret...(with one notable exception, and that episode didn't hit me too well either because an "expert" doctor appeared on the show encouraging mothers to actively and personally teach their pre-pubescent daughters to...well...let's just say "satisfy" themselves so they wouldn't be susceptible to the advances of male classmates). Enough said. And enough to make me decide that Oprah and I were all done.
Truth is, The Secret nearly cured me of Oprah all by itself. Don't get me wrong...I've never had a problem with the concept of positive thinking; including the ideas of good energy and personal attraction, making things happen, and self-fulfilling prophecies; but the whole Secret thing really went overboard for me. Talk about delusions of grandeur! For an (erstwhile?) self-professed Christian, Oprah appeared to be at least in the process of forgetting Who was in charge. And from Whom blessings came. It was almost as if the formerly down-to-earth host had gone beyond thinking of herself as the world's guru and moved right into something more along the lines of personal deification. I had already been feeling uneasy about her, but this really put me off.
Of course, her viewers and the media have had their own part to play in Oprah's evolution from interested, concerned host to self-absorbed, self-aggrandizing icon. It would be difficult for anyone to stay grounded if every word he or she said was touted as gospel. Let's face it, all the woman has to do is mention a book or product, and it sells out overnight. That's pretty heady stuff.
Still, I think anyone who has watched her show lately would have to agree that the most important opinion on any subject these days is Oprah's herself, as far as she's concerned, at least. The big "O" has reached the dubious pinnacle of being a "legend in her own mind." And I, for one, am hereby, offiically, removing myself from her fan base.
Know what? It feels good.
=)
PS. Please note that I will NEVER be removing myself from the fan base of "So You Think You Can Dance." Never. And I can't WAIT to see who makes the top 20 tonight.
PPS. You might want to go check out the big giveaway at Mostly Happenchance (Junky Heirloom's fine papers) and enter. I did!
Posted by Susan Anderson at 9:26 AM

Email ThisBlogThis!Share to TwitterShare to FacebookShare to Pinterest
Labels: in the news, interests, media, opinion, reviews

I could've written this post myself. Your sentiments echo my own regarding Ms O...she outgrew my attention. She used to lead with the intention to inspire, now her leadership seems negligent.
I can't relate. Her life got too big even for her.

I am right there with you! I am be sad to see her fall prey to her own press and money!

UMPH. my husband and i watched that show about teaching our daughters to...you said it best;-) anyway, we also frequently talk about how oprah always talks about her rich friends and how hard it is to have money, after which i roll my eyes and say, yeah, so tough to have everyone do everything for you. don't get me wrong I LOVE TOUGH. i love cooking my family dinner, cleaning up the bugs that infest my house, budgeting our money to make it to the next month until we actually have an income (12 months and couting!), taking care of my child all on my very own. it's "tough." and i love it. it makes me a better person. it gives me satisfaction. it makes me feel like i can conquere anything. so tough, do you worst. b/c i'll end up better off;-) thanks for roaring my engines today sue!

you have such a way with words (duh you ARE a writer!) you 1. make me think, 2. say with eloquence what I am thinking 3. are insightful and quirky at the same time. amen sista

I was never a fan and my husband is oprahphobic. I liked your post though. You are a wit!

I can't WAIT for tonight! This season is going to be so good. And thanks for the mention about the giveaway.That's two entries for you... as if you need more JH stuff. Haha

I agree with you completely. Now, how do I send her some samples of Kristin's frames? (hee hee)

AAAAAAMMMMMEEEEENNNNNNNN Sue!!! This is me giving you a big, fat, loud AMEN!!

By the way, did you know my first post ever was a letter I wrote to Oprah when she disgusted me even more than she usually did. Oh that's just FANfreakinTASTIC...now Oprah gets credit for my starting to blog. This is ridiculous!