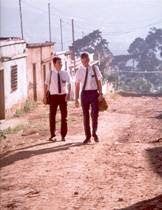 Tomorrow, the seventh missionary from our ward will hit the MTC. For those who are not members of my church, these are young men and women in their late teens and early twenties, who serve at their own expense. My congregation has one in the Dominican Republic, two in Brazil, one in Argentina, one in West Virginia, one in Colorado, and one on the way to Peru. Every month, in our ward newsletter, we look forward to reading a few letters from these amazing young people, offered up by their parents for our enjoyment and inspiration. We also hear occasional reports from the pulpit during talks or testimonies.
One such report, a story that I think you'll like as much as I did, is this:
The second of our missionaries serving in Brazil (he is still in the MTC) has befriended a native of that country. Apparently, the two of them have really hit it off, despite the language barrier, which is still pretty difficult to cross at this point. Still, they manage to mime and gesture their way through most conversations with a fair degree of understanding. They must be on the same wavelength!
The Portuguese-speaking missionary has only been a member for five years, and when he was sharing this information with the elder from our ward, he went on and on about the great missionaries who taught him the gospel. Finally, after extolling their virtues to the best of his limited English, he proudly showed our favorite son (who actually belongs to our bishop) a photo of his favorite missionary, the one he credits with converting him. Lo and behold, this Brazilian elder pulls out a picture of a lovely young woman from our ward! As if that weren't enough of a "coincidence," she also happens to be our elder's cousin! Yep, it was our elder's own cousin who taught this new friend the discussions and arranged for his baptism and that of his family. Pretty cool.
Last Sunday, we had a farewell talk from another really exceptional young man. He leaves Wednesday for the MTC. (Destination: Peru.) This strong, silent, football-playing guy broke every stereotype to write a touching poem, only the second he has ever attempted. When asked for permission to publish it on my blog, he agreed. I only wish you could hear his tender voice that accompanied it.

I have truly been blessed with such a reward,

to have been born in a house dwelling with the Lord.

Although I have not always seen this blessing,

I am grateful for knowing the truth instead of guessing.

Having a mother so close to perfection…

as I follow her, she leads me in the right direction.

From what I can remember as a little boy,

she would tell me to stay strong, and I would have infinite joy.

I recall meeting many different missionaries as I grew;

my mom would say that would be me one day, if I stayed true.

It seemed like a million miles away from then;

from my shoes, I was still a boy, and they were grown men.

I was still learning how to simply pay the 10 perecent;

I could not grasp the thought of teaching far away and paying rent.

Even still, I had my mom to tell me how great I will be,

I could see the belief in her eyes when she said I will be an amazing missionary.

I could not catch any doubt in her tone;

when she would speak to me, I could feel the love down to the bone.

Never have I known someone to talk with so much belief and power;

she lives and breathes the gospel everyday and every hour.

This poem may appear to talk less about me and more about another,

but not even I would know who I am, without my mother.

Everyone knows that, with a blink, time flies by,

now I have reached a million miles…ready to say goodbye.

Just as I have learned to tithe for the money that I earn,

I shall do the same to give 10 percent of my life lived in return.

I owe thanks for all the things I have received to the Lord,

so in return, I will use His scripture as a shield and voice as a sword.

I'm not exaggerating when I say we were all in tears. His humility, gratitude and love––for his mother and for the Lord––really brought the Spirit.

Posted by Susan Anderson at 9:50 AM

I love the missionaries too. I often see them out and about, and if I get the chance I try to buy them lunch to help them out and lift their spirits. They do so much for others, and I can't help but remember the kind strangers who helped my boys.

I love being involved with that age group of people. These missionaries are so inspiring! they make the work contagious!

The Hubby told me about the poem and I'm so glad you posted it here. I will have Michael read it now too, as he was sorry he missed the farewell message.
I also thought the story of cousins J and M was awesome to hear.

That is such a powerful poem. Thank you for sharing it. And I loved hearing about M and J. That is such an exciting story!

What a sweet story and wonderful experience to see his best friend missionary was taught and baptized by his cousin! I love that story. And the poem... I can see why you were all in tears. It is so simple and heartwarming. Sometimes the simplest things are the strongest.
I love missionaries and the work they do. They just make me happy. Thanks so much for sharing.

Such a sweet spirit from this missionary. I'll bet he will make a great one. I hope he keeps writing poetry too. It's neat how much he loves his mother. You can feel that in his poem.

Oh- what a darling young man- I love the missionaries too and I'm sure he'll be a great missionary. His poem was so sweet- every mother's dream- I'll bet it was a great talk all around

I love missionaries! We are sending 17-20 out from our ward in the next month! Can you imagine? 20 missionaries! What a blessing and a great example for my boys. Great poem and of course no pressure for us moms.

Missionaries rock my world.
Love. Them.
You have a missionary in Colorado? Which mission??

One year from now I'll be sending out my first missionary. And neither of us can wait. (Maybe me, just a little)

OH MY GOODNESS, his Mom was probably sobbing after hearing him read that poem! WOW. A moment in time she will relive over and over.

That is such a beautiful poem..and I can only imagine there was not a dry eye in sight after hearing it.

Also, I wanted to add that my husband and I just so happened to have had a conversation about LDS missionaries the other night at dinner. My husband is originally from Venezuela and I'm originally from South Carolina. We were both remarking about what respect and admiration we had fro the LDS missionaries and what a testament of dedication to the Lord they are to everyone. We both shared stories about our memories of seeing them when we were young...
Beautiful story, thank you for sharing!