Be Thou an Example of the Believers 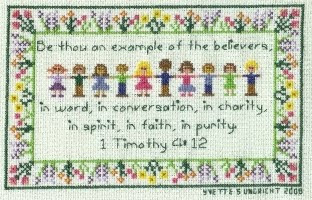 One of my sisters teaches English at a private Catholic school. In fact, she's the department chair, and a pretty good one, if I do say so myself. She's also an immensely talented teacher, beloved by students and co-workers alike. In fact, she is beloved by everyone, including her family members. (me being one of them)
Her children hold her especially dear (of course), for she is an uncommonly wise and nurturing mother. As such, it's not surprising that she dropped critical responsibilities at work instantly (her school is renewing its WASC accreditation this year and is also in the middle of the annual Shakespeare festival) to fly to my niece's side when she went into labor. Neither is it surprising that she stayed longer than initially planned when the baby was born with serious bladder and kidney problems. What is surprising and heartwarming is the unqualified love and support she has received from her school. Other teachers have eagerly stepped in to fill the void, offering their own time and efforts without expectation of reward or compensation. Touching notes, cards, and phone calls have been received; and many prayers have been offered by the school as a whole––during their church services, in their individual classes, and by the students themselves. When she called to check in, she was never regaled with problems or guilted with complaints. Instead, she was lovingly told that what mattered most was Sullivan, her new grandson.
Almost every time my sister speaks to me of this school and her co-workers, she is moved to tears by their generosity of spirit and truly Christlike support. Now that she has returned to their midst, she is hugged and comforted all day long by teachers and students alike. I cannot imagine a more supportive environment for her, and I am grateful for the unconditional love showered upon my sister and her family.
Too often, religions and their members are divided by differences rather than united by faith. Doctrines may and will differ, but true followers of Christ are never that far apart, no matter what church they call home. I am grateful for these fine women who uplift and sustain my sister on a daily basis, who have never shown anything but respect for her as a member of the Church of Jesus Christ of Latter-day Saints. They are "examples of the believers," and I know they will be blessed for their goodness.
Posted by Susan Anderson at 8:53 AM

I read this and thought "yes!" This is the way it should be - ALL Christians banded together.

Fantastic. I've been thinking along these same lines lately.

ditto to what Julie P said!
Love it!

Sue, this post brought me to tears. I'm Catholic, so I was especially touched to hear this. I have many LDS friends, and friends from many other denominations, and what unties us is our love for Jesus Christ.

oops, I meant what "unites" us..not what unties us!

Wow, did this one really get me crying. I too feel blessed that her school supported her so much and I have known for some time how much she enjoyed her teaching at LaReina. She is such a wonderful and dedicated teacher that it's no wonder the administrators like her so much. As for the students, so many have said, years later, what an influence she has made in their lives.

Dick just came into the office and when he saw me crying he said,"When you watch Fox News so much of the time, you tend to lose sight of the love of Christ. It's stories like this that really makes one know how the love of Christ is still with us"

I am do grateful for her school as well and the love and support they have shown both my mom and Sullivan. What wonderful girls and women.

the word that comes to mind is Amen. I have been praying and thinking of Sullivan, being born just when my little grandson Carson was. My work was also very supporttive when I stayed away a week longer. It is a "Christian" company, and this was a time that I felt their Christ like love. Thank heaven for all good "peoploes" Christ like love

My oldest son went to a Catholic high school, and I was always impressed at how wonderful everyone was to us "outsiders." There are wonderful people wherever you go, in all denominations.

How wonderful. What a great school, and even more, what a great example of Christ-like love.

Inspiring!~ thanks for sharing, Sue!

My favorite part of your post today is this, and I quote you:

"Too often, religions and their members are divided by differences rather than united by faith. Doctrines may and will differ, but true followers of Christ are never that far apart, no matter what church they call home"

What a wonderful example of following Christ. Members of different churches should love each other - we all have the same goal in mind. I am very touched by this and so happy for your sister.

Thanks for coming by to visit my blog. I LOVE to make new friends. I can tell I am going to enjoy your blog :D

And THAT is really what it's all about-right?

Ah, I just saw this post. I really am so blessed to work in such a wonderful environment. Not a day goes by that one of the girls doesn't come in and tell me that she wants me to know she is praying for my grandson.

It never fails to move me and uplift me.

Women united are a powerful force for good.