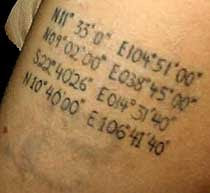 Wandering across the internet one day, I met up with an interesting tattoo that makes its home on Angelina Jolie's arm. This little beauty lists the latitude and longitude of the exact spot(s) where each of her children came into the world and takes a quasi-successful stab at covering the old "Billy Bob" tattoo she attempted to remove several years ago. (As you can see, a few vestiges are left...)
Is it evil of me to suggest (facetiously, mind you) that her desire to adopt more children may be influenced by an equally compelling desire to completely cover the still visible remains of that first, unfortunate tattoo? Looks like she will need at least four more kids to get the job done.
I know. It IS evil of me. Mean-spirited, at least. Patently unfair. And no doubt incorrect. But I had to go there anyway, because the notion amused me.
Posted by Susan Anderson at 8:17 AM

Email ThisBlogThis!Share to TwitterShare to FacebookShare to Pinterest
Labels: humor, in the news, media

I just find the whole idea of tattoos of any kind unsavory - especially on women.
The idea is a good one I have to give her that, but did it have to be on her arm? It would make a really neat wall hanging in her home. Just a thought.

Lets be honest- she was a vial of blood wearing weirdo for a while, so I wouldn't put it past her. and I agree that tattoos are really tasteless and tacky (not to mention that they sag and get gross as one ages)

AMEN! I got your back on this one!

And can I say that "vial of blood wearing weirdo" and "really neat wall hanging" made me snorand laugh out loud?!

I really don't know what to say about either but since my thoughts are not so good I'll just say...my mom taught me if I can't say something nice I shouldn't say it at all.
But really. She could make for an interesting discussion.

Why that? Why not an abbreviation of the country or the city or the year? Really? Lat and long? That's just weird anyway.
Plus, mine would be so boring: two Provo, UT, the rest the same floor in the same hospital in boring Mesa, AZ. Maybe I should look those up and make a wall hanging? Because I certainly don't want them sagging on my arm!

Doesn't realize that eventually no one will be able to tell because as she ages, sags that the kids will all be mixed up? They will not know where they come from?

Although covering Billy Bob is probably a wise thing. Wiser still is no tatoos.

I seriously doubt Angelina is going to sag and be gross anytime soon, so we can all stop looking forward to that. Yeah, she's odd, and a bit kooky, but she's a colorful bird, isn't she? To digress a bit, I think in the LDS church we'd better be prepared to see more and more folks with tattoos (and more) investigating. And we need to be able to see past the tattoos or piercings to the person inside. Sometimes it's hard to do -we all love getting on our high horse - but people do change, and we need to give them that chance. Luckily, my wild oats were not so visible, so they've been easier to conceal. But the battle scars are still there, just under the surface.

No wonder they don't hire me as a spell checker-"snorand"

I'm with you. What is wrong with people wanting permanent writing on their bodies??

you really hit a nerve on this one!(ba da bump)I'm glad you express your opinion it makes me contemplate deeper things.

I love your comment as to how she could erase the rest of her original tatoo. I wouldn't put it past her. I think her current tatoo is pretty weird though. This should be a good example to people getting tatoos in the first place. The reason for some people getting them are not always forever and getting them removed are not always successful. There are a couple of people in my family that I would rather they didn't have tatoos. I hope they will never be sorry that they did it. Maybe only Grandma will be sorry! At any rate, it was an interesting post.

It doesn't look good, that's for sure.

Thanks a lot guys, I have that same tattoo.

Amazing--you are exactly right--it would take about 4 more children to cover the old tattoo!

Thanks for stopping by my blog. I love the way you think! This just cracks me up. I'd seen this tattoo from afar before in some of her photos but always wondered just what it was. The straight lines of numbers kind of mimics a holocaust tattoo multiplied. So glad you clarified.

So funny! I know a lot of people are down on her for so many adoptions, but I figure she has the money, she has the desire, who am I to deprive a needy child a full stomach, a warm bed and clothes on his/her back? I say good for her. And if money becomes a problem she can always star in a reality tv show of her little family ;)

I think it is a sweet sentiment to have something like that for her children, but... well I don't have much to add other than it makes me sad to see people don't understand how sacred their bodies are. Good thing we have missionaries and our own mouths to help people learn that.