"He Has Walked Alone Once": Elder Holland's Witness of Christ 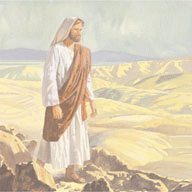 Elder Holland's talk at General Conference yesterday was nothing short of electrifying. His words and the spirit in which he delivered them combined to make this one of the finest presentations on the Atonement and its meaning that I have ever heard. It was also a stirring call to discipleship.
I love how he began the talk so personally, specifically addressing "those who are alone, feel alone, or are abandoned" and reflecting that this applies to "all of us at varying times in our lives." He then reminded us of the Atonement, referring to Isaiah 63:3 where the Savior said, "I have trodden the winepress alone; and of the people there was none with me." That poignant phrase, "there was none with me," resonated in my heart, allowing me to understand Christ's solitary task more viscerally than ever before. Elder Holland further explained that while there was some brief celebration and adulation as Christ entered Jerusalem on Palm Sunday, "eagerness to walk with Him quickly began to wane as the week before the crucifixion occurred." He was rejected by church authorities, political authorities, and finally, the citizens themselves, as they set the sinful Barabbas free and sent their sinless Lord to be crucified.
It was clear that Elder Holland was devastated by the thought that our Savior was betrayed even more deeply by one of His special witnesses, an apostle like Elder Holland himself, one who "sat at his feet" and "heard Him pray" and "watched him heal"... all for thirty pieces of silver. The enormity of this betrayal penetrated my spirit with new intensity, as seen through a latter-day apostle's eyes. As Jesus Himself said, "Good were it for that man if he had not been born" (Mark 14:21).
As if these betrayals were not enough, three of Christ's most faithful disciples fell asleep while He bled from every pore, even though He had pleaded with them to "watch with" Him. "What, could ye not watch with me one hour?" He admonished them (Matthew 26:40). But when He came back a second time, they had given themselves to sleep once more, and the third time as well. Yet the Savior looked upon them with compassion and said, "Sleep on now, and take your rest: behold, the hour is at hand" (Matthew 26:45). I love how Elder Holland pointed out the compassion of Christ, who had been disappointed by his loyal friends at the most difficult time in His life but understood them and offered forgiveness.
For reasons not altogether known to us, Peter denied Christ three times as events progressed. The Lord had warned Him this would occur, but the devout disciple had not believed such a thing could be so. After the third denial, nonetheless, Jesus looked at Peter and the truth spoke for itself. When Elder Holland spoke of Peter's sorrow and weeping, I asked myself how many times I have...in my actions...denied the Savior as well.
"Jesus's supporting circle grew smaller and smaller," Elder Holland explained, adding reverently that John did stand at the foot of the cross with Mary, the mother of Jesus, and that the women in Christ's life were near Him at the end. I felt a love for these valiant, devoted women, who feared not for themselves but only wanted to support the Lord in His need. It made me proud of my own womanhood.
Of course, the most difficult moment for the Son of God was when God the Father finally withdrew Himself, leaving the Savior of mankind truly abandoned in all possible ways. As a completely sinless soul, Jesus had never before been bereft of the Spirit of God, but it was necessary for Him to be so...not only to satisfy the laws of justice in taking our sins upon Himself, alone, but also (as Elder Holland pointed out wisely) so that He could understand what it feels like to be without the Spirit in order to succor those who experience that condition as a result of sin. As Elder Holland clarified, "He had to know how we feel, to die not only physically but spiritually...He had to feel what it was like to be without the Spirit...But the goodness in Him allowed faith to triumph...He knew God never flees nor fails us."
By this time, Elder Holland was overcome by the Spirit himself. Radiating a conviction born of truth and testimony, he testified that, "with faith in the God He knew was there, [Christ] said 'Father, into thy hands I commend my spirit' " (Luke 23:46). "Because He walked alone, we do not have to do so," Elder Holland promised. "We will never be left alone or unaided" because of the Lord's own promise, "I will not leave you comfortless" (John 14:18).
Having (as it seemed to me in that moment) symbolically washed the Savior's feet with tears born of love, reverence, gratitude and commitment, Elder Holland concluded his sermon, reminding us once more of the solitary nature of the journey of supreme sacrifice taken by Jesus Christ in atoning for our sins and cautioning: "Let us never re-enact it. He has walked alone once...May He never see unresponsive onlookers in you and me...May we declare ourselves to be His in ALL ways...in deed and in courage and in faith...including when the path is lonely and the cross difficult to bear. May we stand by Him at all times and in all things and in all places that we are in, even unto death, for surely that's how He stood by us."
Amazing. And I stand all amazed.
What's more, I stand by my Savior, whom I am determined to serve with a renewed sense of joy more than duty, love more than obligation, and eagerness rather than willingness.
"In honor, preferring" Him. (see Romans 12:10). 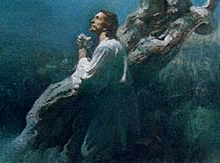 The Savior's Art
©1999 by Susan Noyes Anderson, The Ensign and Awaken Your Spiritual Power
If I accept His sacrifice divine,
Returning love for love as He has done;
If I forget myself and touch the one
Whose sorrows weigh as heavily as mine;
Then will I weave my thread in His design,
That great design the Master's hand has spun;
Wherein salvation through His blood is won,
And all are fed and nurtured on His vine.
If I reach out and calm a troubled heart,
Or let another heal the rift in me;
If, in distress, I take another's part,
As Jesus took mine at Gethsemane;
Then I embrace the Savior's loving art,
And honor Him throughout eternity.

"I am the vine, ye are the branches; He that abideth in me and I in him, the same bringeth forth much fruit; for without me, ye can do nothing" (John 15:4).
Posted by Susan Anderson at 10:09 AM

This talk was in a category of its own this conference. I too was mesmerized by his conviction and his perspective, as an apostle, on the Atonement.
His most profound statement, I must agree with you, was the "we never have to walk alone" part. So powerful. So moving.
Can't wait. Hope this talk becomes a stand-alone volume with pictures of the Atonement.

wonderful post, Elder Holland's talk also touched me deeply, I come by way of Seegalluh, I liked your answer and clicked on your name. ta dah, I am here.

I could hope I would (or haven't) ever caused him to feel that way, alone. What a powerful testimony he delievers, he is always one of my favorites.

Thanks for your insight, I sure look forward to your posts.

I too stand all amazed. Elder Holland's talk was one for the ages. It touched me to the core. I really have no words.

Amen to all that you wrote.

Sue, I want you to know how you have touched my daughter's life...for the good.

I love your blog, I must drop by more often!

Natalie is right...I think we would be great friends.

Such a powerful message! You've got me excited all over again for this weekend. This was hands-down my favorite talk! :)