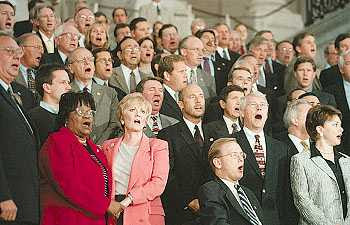 Can you tell the Democrats from the Republicans? The Independents?


I just finished watching the video of Dave Letterman's first show after 9/11 and was reminded how that shared experience managed (for a time) to bring all of us together in ways that, sadly, only tragedies sufficient to threaten our very existence seem able to do. While I did find myself wishing we could somehow sustain that unity in the absence of heart-stopping terror and/or universal grief, there was comfort in viewing recorded proof that, in those moments when the very fabric of our nation is tested, Americans still possess the capacity and inclination to stand as one against anything or anyone who threatens us. At our very core, we are still the United States of America.

The challenge to us now, as citizens who value our way of life, is to realize that serious threats to our country are not limited to skyjacked airplanes, suicide missions, or terrorist bombs. Sometimes the worst threats contain no physical elements of danger at all but are internal, indigenous, insidious, and all too often, invisible. They include unprecedented disrespect for the founding principles of our nation, disaffection with the constitution and its tenets, disharmony among ourselves and our leaders. They encompass the paralysis that comes from politicians and legislators holding petty self interest above the welfare of this country, the disillusionment that accompanies too many broken promises, and the despair of feeling (even in the process of exercising our right to vote) that we are entirely powerless to change anything because elected representatives on either side cannot be trusted to act in our best interests or the nation's.

Not long ago, I wrote a post invoking the phrase "E Pluribus Unum" (out of many, one). Undoubtedly, some found my call for that level of unity quixotic at best, but I beg to differ. Although I don't deny being an optimist, even an idealist at times, I am also a realist in my way. For me, the notion of being united as Americans does not conjure visions of walking in lockstep or even sharing the same opinions and/or beliefs. Quite the contrary. We do not have to agree with one another to be united; and in fact, the United States of America is all about the dynamism of not agreeing...being free to speak our minds, be heard, and negotiate a path forward that gives each of us enough of what we want while keeping our country afloat. The unity part is staying in the same boat (even though we have different rowing patterns), refusing to capsize it, and choosing to negotiate a rhythm that accommodates all of us because we are headed for the same destination and are willing to make personal sacrifices to get there. An overwhelming majority of Americans love this country dearly and want to preserve it. Therein lies the universal goal or destination, and sharing it makes us one in purpose. We are all in the same boat, united, and united people make necessary adjustments so they can row (accomplish their common purpose) together.

We did this after 9/11 and we can do it now, with our eyes wide open and firmly fixed on the prize. It is not impossible, not a pipe dream, not pie in the sky. It requires brotherhood, humility, and self-mastery. It demands a spirit of compromise and mutual respect. It hears every side with an open mind and a stronger desire to do right than to be right. It speaks the language of tolerance, discernment, and discretion. It begins with every individual.

I'm 60 years old, a baby boomer who has never felt as uneasy about our country as I do today. There is a lurking menace out there, a clear and present danger, and it is us. Which is exactly why we are in a position do something about it. 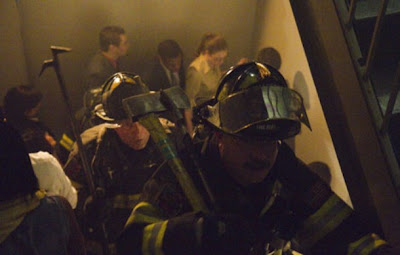 These firemen, Americans all, rose to the occasion.
So can we.
Posted by Susan Anderson at 12:14 PM

My brother was on those capitol steps and my heart was in my throat. As scared as I was that day, I am even more unsettled today. You expressed my own fears Sue.

amen. i agree...was just commenting today to someone the feeling of how it brought us together...and yet 11 years later it does not feel that way at all....what a hard day that was...

We too often joke about "peace, love and brotherhood" as if they are unattainable. They're not. They are what will save us all.

I agree, and love the sentiments expressed here. I think most Americans would concur, and most of us could manage to do it. It's such a small minority who refuse to cooperate, who refuse to accommodate others in any way. Those are the people we need to drown out with our louder, more beautiful singing voices.

Well said and all too true. I am so concerned about the hatred that is being bred in our own country against ourselves.
I'm grateful for those who never keep trying and for those who keep praying for all of us.

God has been taken out of the equation in many instances...and I believe if we don't turn back to the simple "In God we trust"...we are in deep trouble. We can do it as a nation but not without Him.

And it brought a tear to my eye!

I so agree with this!

I agree with you. I believe the evil or the downfall will come from with in. I wish we could get back to how everything was after 9-11.

Sue, very well said. Infact, you should share this in a editoral section of a newspaper. It is very scary right now. I see it as a big sign of the 2nd coming. I just hope we have enough faithful people to save our constitution.
It is hanging by a thread.
Blessings to you for this one!

This was a very fitting post for this sad day in our history. It was amazing how we did come together though. Why it takes some kind of disaster to bring this about, I'll never know.

It seems like every day something dreadful happens in the world. I'm getting so I hate to even listen to the news.

The pride cycle is getting ominously close to the peak, don't you think? How easy it is to feel helpless to changing things in the world today. But I am learning, it doesn't take a lot to make a stand. Especially if that stand is something you believe in. Such ponderings. It will be nice if this election can bring a little more unity. Less mud slinging, more focusing on the relevant threats and problems and their solutions. Sigh.

I do love the way we all came together after 911. I'd never seen anything like it.

A very moving post; too bad congress doesn't see things that way. We can only hope they'll wake up someday and do what is right for the country.