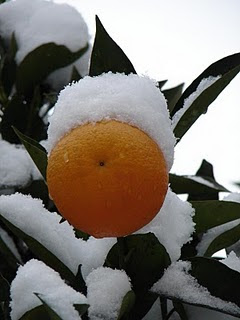 This week's prompt for Jenny Matlock's Saturdy Centus is a picture. Stories should be 100 words or less.
∞§∞
Perishable
She awoke to a world still spinning on its axis, but horror stood one sleepy stretch away. When memory exploded, striking every nerve in her body simultaneously, she crashed like an overloaded computer. The pain went with her.
He was dead, had been dead twelve hours before she even realized. Twelve hours she had washed her hands, done laundry, eaten, breathed and laughed, not knowing she was in the world without him. Could such a light be lost so silently?
Outside, the oranges were frosted over, bright goodness gone the way of her own fruit, the sweetness of her womb.
∞§∞

Posted by Susan Anderson at 8:42 AM

Sue, you are a marvel. This was simply stunning. You captured such complex emotions so beautifully, and in so few words. Perfectly written. Kat

oh my, that was beautiful. Simply chilling. Wow.

Sue, I love the honesty and rawness of your thoughts today. No need to apologize for the anger...it's one of the natural stages of grieving. None of us can know the depth of anger that goes with such a tragic loss. Hug your children and tell them you love them...every day.

I hope I never have to feel that. But if I do, I will know how to describe it.
So hard.

Ouch! This was unexpected and very, very sad. But so well written. You are an amazing writer!
Bless you Sue.
Anna

Chills just went down my spine...what an imagination! I,too, hope that never happens to me...or anyone I know. But it'd make a good "Murder She Wrote!"
Your writing is simply amazing!!

That was so sad...it kind of hurt my eyes to read it. That's good writing.

Hard to read for its pain, but you did excellent job in the writing, Sue.

So beautifully written..I felt the emotion so strong it took my breath away. That story came from somewhere deep inside didn't it.

Loved it! Amazing how you can provoke such emotion with so few words. Beautifully done!

Oh my, that one really hit home. This is one of your best,I think,and you probably whipped it out in minutes. It is just so descriptive and painful......how the heck you do it week after week, I'll never know. (And I'm not about to even TRY to find out. That centus thing is totally behond me.

Sue you never fail to demonstrate what an amazingly gifted writer you truly are. This was a beautiful piece, packed with emotion and imagery. Brilliant!

Wow. That made me shutter but it was good. I love the way you put words together.

Sue, I agree with everyone who commented before me. The emotions leap out and touch the reader on so many levels...I remember feeling very similar when I lost my brother: "horror stood one sleepy stretch away" Exactly! He was alive and well when I left him. Little did I knew he had become victim of a drowning accident when I awoke the next morn. Great writing can pull these emotions and memories out. This was great writing. Bravo!

Oh my. Makes me want to know the rest of the story.

wow. that was amazing.

Wow. This gave me a lump on my throat...
As always, you are amazing.

This is intensely powerful and beautifully written, Sue.

I didn't make it to class this week, but I'm glad to make the rounds.
Blessings,
xoRobyn

wow. kinda glad i read the follow up to this...what a hard place...prayers.

It's such a gift to be able to capture real life so well in words.

Crying, again. You have a way of making even the really hard things bearable.

Thats so sad. It doesent bear thinkin about does it that

I would write 'wordless in admiration' but I couldn't because that would be a lie.

I could call you up and tell you I was 'speechless' which would also be a lie...

So all that's let to me is to say, "Holy my goodness, gracious, girl...you are incredible..."

You can definitely write.