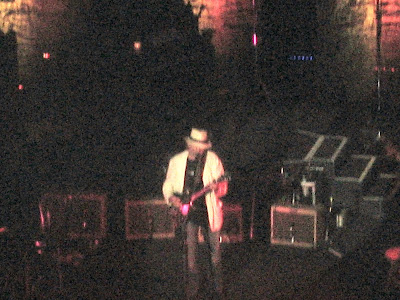 The laid-back Zealots were out in full force to see Neil Young last night. (That sounds like an oxymoron, but I promise you, it's not.) Every old, washed out hippie––and young wannabe one––just happened to be there in full force, and the crowd was as friendly and rabidly enthusiastic a group as you'll ever want to meet. Was I one of them? Almost! But the smell of cannabis, while nostalgic, never was my favorite...and the guy directly behind us was smoking up a storm. He even invited Ryan to join him by passing a bowl under the arm of his chair, but many of you will be glad to know Ryan passed on the offer. Don't worry, I was careful not to inhale, which was difficult considering that the air was replete (at various times) with weed.
Having said that, it was a wonderful, memorable evening. My two favorite songs of the night were "Helpless" from the acoustic set and "Ohio" from the electric set. The latter anthem from my youth had me and more than a few others feeling all the angst, anger, and wonder that was part of that time. And what the guy can do with a guitar and harmonica...to say nothing of his alternately haunting and raucous (always riveting) voice, is nothing short of amazing. At 68, he just seems to get better.
One of my favorite moments of the show was when he went to the piano, sat down, and played a touching tribute to his granddaughter, Leah. The tenderness in his voice as he crooned her name in the chorus almost brought me to tears. And so did a song that was more like an experience...or a several-act play...where he began his musical saga with Indians and wagon trains (you could seriously hear both on his guitar) and continued all the way to you, me, oil, and global warming...finally coming full circle to lament the journey (again via incredible guitar sounds o' magic) as a wise and saddened Indian. I may not be entirely on board with the guy's politics, but as an artist I am awed by the way he uses his instrument to express himself. Seriously. I just sat there and marveled. And after the spill in the gulf, I have to say that I was feelin' him on this one.
It was a stellar night, and I had such a good time with Ryan. We began the adventure with a drive through some of our favorite areas of San Francisco, then headed over to a yummy little Vietnamese restaurant where I had green papaya salad, spring rolls, and yellow vegetable tofu curry that is still making my mouth water this morning. Absolute heaven. We even met Dave (the hubby) at Union Square before dinner to pick out and purchase a new suit. And wowza, does he look drop-dead gorgeous in it. Sharp and sizzin'. After that, we hopped the Bay Bridge and made our way to the Fox Theater and the best part of Crosby, Stills, Nash and Young. (I admit that's a closely contested race!)
What can I say? The night was all that and more. And I'll be remembering it for a long time to come... 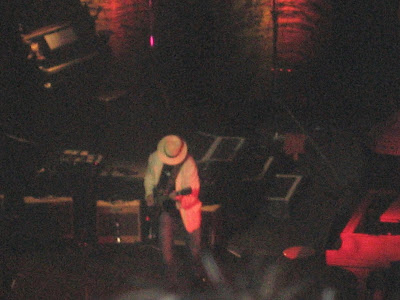 Take a bow, Neil. You rocked it.

Posted by Susan Anderson at 9:00 AM

Glad you had a wonderful time.

Ahhh.. the smell of weed at a concert... seriously though, it sounds like it was awesome. I wish I could have been rockin' right next to you. We love Neil at our house. (And our house is a very very very fine house...)

Super ‘Z’ post – glad you had such a great time with Neil!What a wonderful voice!

PS Mine this time is HERE. Hope you can join me!

I have to admit I never got into Neil Young but it sounds like it was a fab concert!
I especially love your pictures in your last post - I miss all those great theaters sometimes!

Glad you had fun! Look at you Sue just continuing to rock out!

I've always liked Neil Young. I used to listen to my fathers old records when I was a child. I would love to see him as well!
Glad you had a great time--sounds like a neat concert.

Sounds like it would have been a fun, nostalgic night. I love those old songs. Sometimes I think we need some songs like that now. Oh well!! Great Z post.

I'm more of a Bruce Springsteen fan, but this sounds like a great concert. Thanks for sharing it with us.

Men are so lucky to keep their voices into their 70's. He is a fun entertainer, and it looks like the venue was amazing too.
Jealous, I am.

What a great night!

Glad you had a good time, and that you passed on the cananbis- I hear it kills your brain cells. Your Vietnamese dinner sounds so delish too.

Of course I never inhaled, Em! As Jess says, it kills brain cells.

(And, since menopause kicked in, I'm afraid I don't have any to spare!)

Lucky, lucky you!! I love Neil Young, but no one sings Helpless like kd lang - it will make you cry.

You are so lucky. He had a stroke but you could never tell. I love him and all his songs. My daughter bouggt me his CD and his songs are just as fresh today as they were so many years ago. Thanks for sharing.

It sounds like you had a great evening. I can't believe a theater like that would allow smoking of any kind. That would have sorta ruined it for me, to have to sit right in front of someone who was smoking weed. Anyway, I'm glad you found Neil Young just as enjoyable now as he used to be years ago. Why don't you bring a CD to the beach so that I can hear some of his music.

He is a classic, his music, the times..some memories are engraved in our minds forever....glad he is one of yours for safe keeping...blessings...bkm

I went to a concert in San Francisco in 01 where there was definitely some interesting smelling stuff filling the room. Haha!

Glad you had a good time.

Wow, what a memorable night, indeed! And hey, is that some Mr. Neil Young songs I see on your Play List?? :D

it sounds like a wonderful time....He is a great artist....I love vietnamese food too....you made my mouth water thinking about it....yum.

I could hear his voice and the sound of his guitar all the way over here. Awesome that you got to see him. I just love when they mix the old with the new.

I came by earlier, but I had to come back and look at those pics again. I..love...Neil...Young....
He's been my favorite forever!

Thanks for the photos, they really made my day..

I think hearing KD Lang sing "Helpless" would definitely bring tears. Sounds like you guys had a great time, I am very jealous.

I am happy that the evening proved to be wonderful for you...
LOL
And your Z post title is so cute!
LOL

It sounds like you had a wonderful time at the concert..I've not attended one yet..

I'm glad you had such a fun time!

Sounds like a terrific evening. Glad you got to attend.

What a fun and nostaglic stop on our little journey through Alphabe-Thursday's letter "Z"!

I think "Ohio" is my favorite song by him.

I'm glad you weren't disappointed in this concert. Sometimes when my husband and I try to revisit an artist we loved when we were younger we are shocked and amazed that this tottering old geezer is the same person.

But I suspect that's what the artist would say about his fans being tottering old geezers well!

Thanks for being part of this meme.

I always enjoy visiting you.

Neil Young? I am green! (Do I say that a lot? What can I say, I envy you.) What an awesome night you had.