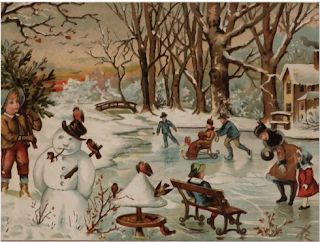 And a very merry Christmas to every one of you.
💖
Sue
Posted by Susan Anderson at 11:57 AM

Merry Christmas to you Sue. This brought me to tears because of the empty chairs around our family table at holiday times. My Dad, Jack's parents, Jack's brother, and my sister's son, Jonothan who passed in Jan. 24, 2004 at age 18...way too young and left an empty spot in our hearts as well as in our homes. This must be a difficult time for you but I know, as you do, that families are forever. They aren't that far away if we keep them in our thoughts. I know Jesus is the Christ and he lives and because of that, we will and our loved ones do, also. I hope you have a wonderful holiday and feel His love for you as you meet with your family members this season. Love you

Merry Christmas to you, dearest Sue!
This was just the most lovely story ever. It will be read to our family. I loved every word, and it was beautifully written as always. I love your poetry and stories. I know that this fits your journey of the year. Your losses have been significant. I can tell that you take great comfort and joy in knowing that you will see these loved ones again.
I have a testimony that they aren't far away at all. I feel that those that are beyond are right by us more than we can even imagine. I think you know and feel that too.
Thanks for sharing your heart on this one!
May light and love of our Savior be in and around you always~
Warm love and hugs for you!
LeAnn

Thank you for sharing this wonderful post keep your awesome work
I have many hobbies. I love to travel and read. But my favorite hobby is cooking. Let me tell you why! First, I'll tell you a little bit about why I started cooking. Secondly, I'll give you some information about what I like to cook. Third, I will say how I use the Blog ẩm thực for cooking.

When I started cooking, I was 10 years old. My mom wants me to be a chef. She has always believed that girls have to make different types of food, because one day they will get married. In my country, it is normal for girls not to cook. I feel lucky because I can cook many dishes. Now that I cook some of the dishes my children and husband love, I become happy and proud of my mother and myself. Foody

takin' a little peek at the world!

WELCOME! And thanks for peekin' at MY world. Look for everything the blog's name implies...from news and views to whatever comes from my muse (?) to various musings on life in general.
I LOVE feedback, but be gentle. Bryce gets kinda sensitive about his grandma. ;)