Kids Do the Darnedest Things 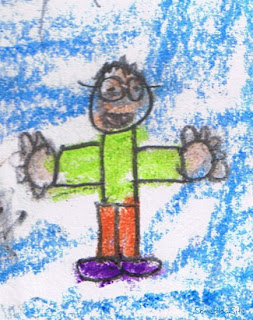 When my youngest son was in kindergarten, I got a phone call from his teacher expressing serious concerns about his mental health. Needless to say, finding out that the principal wanted a joint conference with the two of us aroused my concerns, too.
I arrived in the classroom only to be shown a picture my son had drawn of himself at the teacher's request. He'd created a pretty reasonable facsimile, as had the other children. The only difference was this: After drawing the picture, he had taken a black crayon and scribbled all over it, as dark as he could. Basically, he had crossed himself out.
I don't think I need to tell you that the implications of this were not good. Still, I'd seen no signs of the depression (or worse) that his teacher and principal were suggesting, and I just couldn't wrap my head around the idea. The whole thing was disturbing, though; and when I got home, I asked my little boy why he had used a black crayon to scribble all over the self-portrait he had drawn. His answer surprised me.
"I want to be black, like Michael Cooper," he answered matter-of-factly. (Michael Cooper was his then-favorite basketball player on the Lakers.) In other words, his "depression" was actually hero worship!
I tell this story for two reasons. One, because it's kinda funny. His answer really tickled me at the time, and I think the teacher was pretty amused too...well, equal parts of relieved and amused.
The second reason I tell this story is because it's a good one for parents to hear. Things are not always what they seem, and while it's important to investigate any red flags or warning bells that we see (or hear of) in regard to our children, it's also best not to jump to conclusions. Sometimes there are logical explanations for seemingly illogical things.
Just something to think about vis a vis the parenting process...
;)
for more K posts, click below

Posted by Susan Anderson at 1:16 AM

Hilarious! You're right of course, things are not always what they seem. But this is HILARIOUS! Part of the family lore, to be sure.

I love the story and the underlying message: ASK. We all know what happens when we assume, right?

What a great story with a great message! Too bad the teacher didn't ask before they panicked!!!

Sue. I love this. You are so right.

I think we're all anxious to jump to the worse possible conclusion!

This was such a sweet story. Is this your son in MEDICAL SCHOOL?

Congratulations to you all again!

This is cute. I know kids get stressed or drama out by pressures, but more times than not, kids are just being kids in full innocense like your son.

We certainly do need to ask questions when needed, but shouldn't we always have an open line of communication with our kiddos? I think so because this is the only way we'll know when there is a problem.

Come by to read today’s post:
K is for Knight in Shining Armor

Thanks for the reminder.
I jumped to conclusions with one of my girls yesterday. I just assumed she was at the root of a drama fest but she wasn't....this time.
I think constant communication is key.
My youngest has always wanted to be Samoan. Go figure.

What a lovely way of reminding us not to take what kids (or indeed anybody) says at face value. How many times have we been misunderstood because someone didn't stop to really question what our motives were... and I'm so glad your son wasn't depressed.

I got a call like this when my 2nd son was in 3rd grade. He wrote a story that was so violent sounding. Turns out his dad was home recovering from surgery at the time and was watching One Life to Live every afternoon when the kids got home from school. Apparently that soap opera started the imagination going in my son. Thankfully my husband soon recovered and that program was never on again in our home :)

That's a good story. I hear stories like that every week I'm teaching. I need to start writing them down!

Kids say and do the darndest things! They also have an innocent thought process. You gotta love a child. ~Ames

So cute, I love the things they say and do at that age :-)

I got one of those calls once. My oldest told his teacher he couldn't sleep at night because his parents were fighting...

When we asked him why he would say such a thing, he said that the teacher had asked everyone what their worst problem was and he wanted to have the "worst" problem of the class, so he made it up!

I love this story, I can just see that little guy making himself black in the drawing...

Great anecdote. I spent way too much time jumping to conclusions in my mothering. I hopefully have learned a thing or too.

That is a perfect story to illustrate some great advice, thanks!

And kids often have another logic as we adults. We too when we were kids thought differently !
It's such a nice story !

I love the story, and my little boy had the same experience once. Yes, things are not what they seem all the time!

Have a great weekend, Sue..

Oh that is so funny!! I love this story--the true ones are always the best, aren't they?
Happy 4th of July to you--hope you have a wonderful weekend!
XO

So true about not jumping to conclusions! I love your last paragraph. I often think my grandkids look so troubled and assume a major problem, when it usually is something very minor!

This was a great post Sue. I do remember when this happened and I really got a huge laugh then, and I also got a petty big one after reading this reminder. I think this is such a good post because it really does help a lot of people to communicate with their children. I have a really good friend who has a very funny granddaughter. She is always telling me about the funny things she says and does. I told her that I wished I had written down all the funny things you guys said and did and honestly, I just can't remember. I told her it would happen to her when she got to be my age. She actually took my advice and has written everything down. Won't this be a great thing for her to read in her later years, to say nothing about how much it will mean to Capree. Won't she love having these stories to read about things she did when she was growing up? How I wish I had done that for you guys as well as for me.

By the way, when are you going to write that book about parenting your children? I hope you haven't decided not to write it. It would be so very beneficial to todays parents. If you do write it, this would be a great thing to put in it, and also advise parents to write the fun things their kids do so a record can be kept.

What a sweet story - and such a good lesson for parents...for everyone, really.

Good reminder! I remember the time one of my brothers came home bearing a blank sheet of white paper with a note from the teacher. Mom worried that he wasn't cooperating in class. The note simply explained that my brother told his teacher that he'd drawn "the invisible man." (He hated to draw). Luckily the teacher found it "creative" and amusing.

Great story with a good message.

I love the spontaneity that children have, something that should never be lost.

Great story and definitely a great message for us parents here :) E is only 2 but she does some of the strangest things that makes me scratch my head all the time. I use to worry that the things she does was a tiny cry for help or attention but these days, I know that it's mostly E being E and that's just how she views the world.

Kids think so much simpler than we do and they view the world with so much innocence, don't you think?

Jumping to conclusions never does anyone any good! Good reminder:)

When our son Keil was in the first grade, one day his teacher called and asked me to come fetch him because he was roller skating in the classroom. She just couln't deal with a cheerful and carefree child!!!

What a great story...had me laughing! It's funny when we try to psycho-analyze kids, and they have us fooled! Love it...and a great reminder to find out what's really going on. Thanks for sharing.

That's a wonderful story, and a great reminder! (and a fantastic bit of art, too!)

What a great story, Sue!! So funny once you know the real reason! This is an excellent reminder that things are not always what they seem!
Boy can we really learn from our children sometimes! :)

HAHA, Like everyone else, I'm giggling at this one. Great story and lesson:)

And the reason his teacher hadn't asked about the black crayon is..? It's the first thing I'd have done!